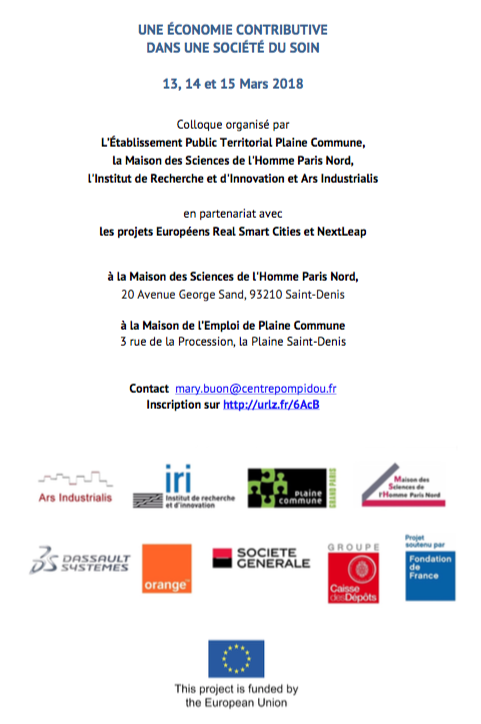 In the context of the Economy of Contribution, this day will outline the contours of an alternative vision to the exclusively computational Smart City by advancing elements of analysis from the predominantly technocentric point of view, and by reviewing the principles and distinctive elements of what should constitute local platforms of deliberative and integrative digital urbanity.

Beyond computerized urban life, based on a systemic and permanent collection of data, the smart city is a marketing strategy aimed at the computational governance of the urban environment - the use of digital technology in the management of urban life being legitimized by its potential for improvement. A town or a city, however, cannot be reduced to calculable efficiency: it can only last and develop harmoniously if they serve, what philosopher Gilbert Simondon called, a collective individuation - which should be characterized here by a new right to the city (elaborated by Henri Lefebvre). This right would also be a new right over public as well as private data not ignoring the question of what we call urban commons. This day is organized with the European projects Real Smart Cities and NextLeap.

Talks will be given in French and English.

As an alternative to Computational Smart cities in the context of an integrative innovation this session will draw some historical perspectives over the Right to the city of Lefebvre in order to design and install new urban metabolisms beyond urban mobility alone, as it generally appears to be the most obviously transforming new feature of contemporary urbanity made possible by the digital exosomatization of individuals and groups. However, mobility is not reduced to kinesis, that is to physical movement in space: it also resides in the metabolè as capacity to grow. Through its training program Plaine Commune Contributive Learning Territory intends thus to contribute to the emergence of the new urban metabolisms required by the transformation of exorganisms caused by digital urban technologies., a digital urbanity by capacitation of its inhabitants, and through the primordial functions of the territories which are the economy and education,

Capacitation and deliberation over data

Digital technologies and their disruptive effects are based on the fact that a de-spatialization is carried out at the same time as a de-temporalization by the virtual becoming of operations that disappear and escape any deliberation in the algorithmic governmentality. This state of affairs renders inaccessible and inconceivable the rule of law constituting a true digital urbanity - if it is true that it can only be deliberative.

The Plaine commune project which is associated with Dublin, Durham and Guayaquil in the Real Smart Cities project propose to consolidate locally a urban consciousness of the new digital functions by making them objects of capacitation, not of incapacitation, for example by designing in the NextLeap project decentralized services and data control and interpretation functionalities that solicit and reinforce systematically the deliberative capacities of the various groups formed by the inhabitants of the territory. This approach is intrinsically linked to the capacitation processes that are being defined in the context of the Plaine Commune contributive learning territory in order to allow the experimentation of the contributive income and the related economy.

The digital urbanity that we propose to experiment on the territory of Plaine Commune is part of the will to make digital technology a new capacity which will lead to the inhabitants transforming the urban environment in order to improve a better urban life, where the urban is inseparably individual and collective. This perspective is part of the claim to the right to the city as defined by David Harvey expanding on Henri Lefebvre and as “power of fundamental and radical shaping exercised on the processes of urbanization, that is to say on the ways in which our cities are constantly being transformed “. This session intends to confront the Plaine Commune context with the perspective developed in Dublin and in contrast with Guayaquil.